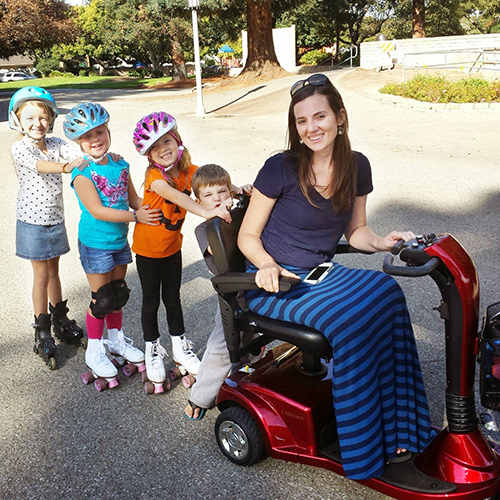 Julie is a 39-year-old mother of three, a graduate student in counseling psychology and an active member of her neighborhood, her church, her children’s schools and the LGMD2i community.

She was diagnosed with LGMD2i in 2003 yet had symptoms of the disease from early childhood. She grew up in a large, busy and loving household with her parents and 5 siblings. “I was always around kids and life was awesome!” She remembers always being slow as a child, the last one when running, playing and riding bikes with her siblings and schoolmates. She had trouble climbing stairs as well but despite consulting many physicians,  there was never an explanation. She recalls feeling humiliated in school– ridiculed by her physical education teacher who claimed she just wasn’t trying hard enough. She internalized the criticism, pushing herself to exercise, diet and go to great lengths to ‘get in shape’.

“It was at least 10 years of going to different doctors and just being told, “You got to try a little harder.”  Finally, during a family trip, when she was unable to walk down a slope to a waterfall, her family saw clearly that there was something wrong.  She was referred to a Muscular Dystrophy Association clinic and ultimately given a diagnosis of muscular dystrophy. At that time, though, she was incorrectly diagnosed with FSH (facial scapular humeral dystrophy). Sometime later, when pregnant with her first child, she was diagnosed with LGMD2i.

As many people living with 2i whose diagnostic journey was long and often confusing, she felt both relief and terror at having a name for her condition. She worried about the impact on her family and her future. “By the time that you get to actually having a diagnosis, you feel relieved, but you also feel terrified that maybe you would rather not know what’s coming. I think your mental health is very impacted”.

Nonetheless, Julie was determined to live a full life and not let her disease get in the way of her dream to have a family. She now has 3 children (aged 13, 10 and 5) whom she describes proudly as confident, loving, kind, empathetic and helpful to others.

There have been challenges along the way, some bad days and some wonderful days. She initially tried to hide her struggles—both physical and emotional. But, with the support of peers via the 2i Facebook group and connecting with others on the same journey at LGMD meetings, she found that being more open about her condition, including using mobility aides, was liberating.

Julie uses a scooter now for mobility and has learned how to make adjustments to her daily routines. “Making those adjustments was definitely was a mental struggle that I had to overcome. I remember I wrote in my journal that I thought using a wheelchair meant that I quit, and my life was over. But when I sat down in the scooter, and I was able to go to the park with my kids, I saw how much more I was able to do with my life by using these tools. I worried my kids would be teased at school about having a ‘wheelchair mom’, but they thought the scooter was cool!”!”

She contributes a great deal to her community. She finds the support of her husband and children, her church, her friends and neighbors enable her to live a full and satisfying life. “I try to find areas where I can also help people, it feels good adding what I have to offer to the community that does so much for me”. She helped begin an after-school drama program at her children’s school and helps runs an art program through the school PTA.

Living with LGMD2i is her new normal. “I am all about finding a cure and a treatment to slow progression. But I also want to live life and find happiness now.” She notes that if she were to give advice to others living with 2i, it would be just that—stay active and find happiness. 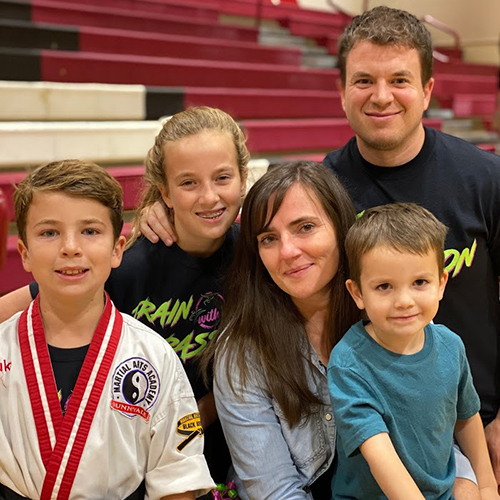